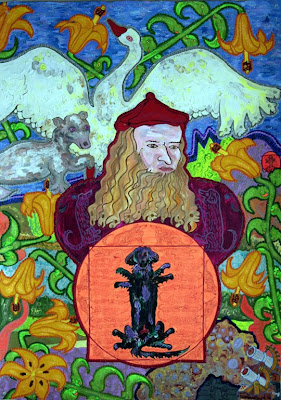 Born in German occupied Latvia in 1942, Maija Peeples-Bright's parents, Herberts and Biruta Gegeris, were forced to flee the country with their infant daughter. Through the assistance of relief agencies they were able to find a sponsor in Orangevale, California. In 1951 the family moved to Sacramento, and when Maija began attending college at the University of California, Davis, in the 1960's, she was a math major. A requirement for graduation was that she complete an art class, and it was that first class, taught by William T. Wiley, that prompted her to change her declared major to art. She earned a Master's Degree in 1965, and the home that she shared with her husband, a professor at the San Francisco Art Institute, became known as "The Rainbow House". Painted inside and out with every color created by Dutch Boy brand house paint, visitors included UCD notables such as Wiley, Robert Arneson, Clayton Bailey, Roy de Forest, Wayne Thiebaud, and Peter VandenBerge, in addition to those from the Art Institute included Joan Brown, Jay DeFeo, and Manuel Neri. Many of the artists either became known as California Funk artists, or associated with the Bay Area Figurative style. Funny phrases, silly creatures, and word puns continue to inspire Maija Peeples-Bright's drawings, paintings, sculptures and prints which are held in high regard in collections throughout California, Nevada, New York, and Canada.