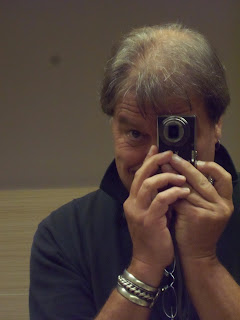 This year, Richard had two exhibitions of his work running simultaneously during the month of September.

A show of his Relic Series opened in Riverside, California. This group of paintings are embedded with objects such as leaves, sticks, rocks, gourds, – even a snakeskin. Some are on paper, some on board in a variety of sizes. Richard’s opening was part of the Riverside Artwalk, and he had a good look at the growing art scene in that city. 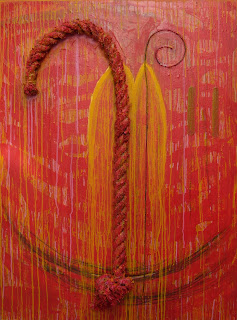 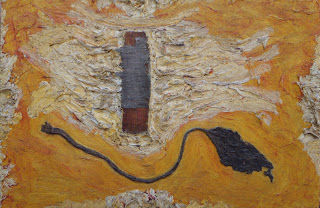 Then Richard jet-setted back home, where an exhibition of his collaborative dream paintings was opening at Piante Gallery in Eureka. Richard and a friend, Madeline McMurray, have been sharing dreams and painting them together for several years. This exhibition showed 18 of their big, 30x44” works, acrylic on paper, a colorful and dynamic exploration of images and interactions. 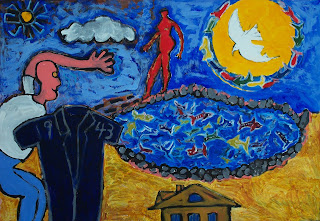 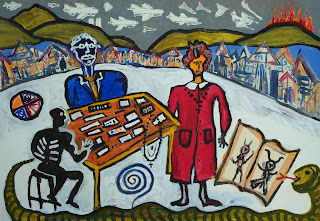 Before returning home with the Riverside pieces, Richard and his partner Nancy fulfilled a dream of camping for a week in Chaco Canyon. There, they studied the ancient Puebloan ruins and artifacts, and Richard created a series of sketches and drawings. This trip culminated a summer of travel, which included a pottery village in France, ancient ruins in Sicily and even more ancient Neolithic ruins in Malta, all inspiration for future artwork.
To see more of Richard Duning and Madeline McMurray's collaborative paintings, please click here. To see Richard's work through SD Gallery, please click here.
Posted by Solomon Dubnick Gallery at 5:20 PM